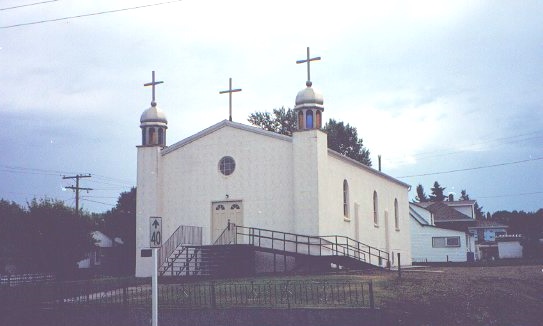 The first church was reconstructed from a school structure in 1952. This small structure with three frontal crosses served the parish for ten years. In 1962, when the structure and site were sold, construction of a larger church was initiated and completed in 1968. The parish was honoured with several visits by Bishop Andrew Roborecki who blessed the cornerstone and church on June 9, 1968.

The present church, on a two lot site in southerly Weyburn, is constructed of concrete and concrete blocks and stands on a high rectangular concrete basement, 60 x 30 feet. The interior walls and level ceiling have a

plasterboard finish; the walls of the sanctuary have wood panelling. The elevated sanctuary with the main altar is in the eastern end of this east-west oriented church; on its corresponding north and south sides are two sacristies with stairways leading to the church basement and church grounds. Two small side altars dedicated to St. Ann with Mary the Mother of God and St. Joseph with the Christ Child are also on corresponding sides of the sanctuary facing the nave. The two icons at the side altars and the church patron painting behind the main altar were done in the oil on canvas technique by the artist Stefan Meush.

The church is entered from the west by a concrete stairway with a wrought iron railing. It has a vestibule and a choir loft which is reached by a stairway at the north wall of the nave; confessionals are at the south wall of the nave beneath the choir loft. The floor of the church is covered with linoleum; the central aisle, sacristies and sanctuary are carpeted. Wooden pews in the nave provide seating for approx. 100 persons. The church has electricity, plumbing and central gas heating. The basement serves as a parish hall, contains a well equipped kitchen and, in addition to the north and south entries previously mentioned, is entered from the north side of the vestibule.

Construction costs of the church, $20,000, were covered by the financial contributions and voluntary labour of the parishioners. Some assistance in the construction, funds and construction material came from other ethnocultural groups in Weyburn who admired the generosity and initiative of the small church community. The chief director of the construction was Walter Boyko.

Ukrainian settlers arrived in the Weyburn district in 1905 predominantly from the Ternopil county. Settlement in Weyburn began as late as 1951 at the time of the acquisition of the first church structure. Prior to the purchase and alteration of the church the community was served by Rev. A. Schesniuk and holy services were held in private homes, particularly at the family home of T. Dolinski. The founding members of the parish were: Samuel Bocian, John Unilowsky, Nicholas Syvy (Siwy), Theodore Dolinski, George Chorney, Wasyi Oryschak, Yurko Lozinsky, Mykola Zipchyshyn, Peter Paslawski, Daniel Lucyk, Harry Dudar and Andrew Hrycej. In 1967 the parish registered 60 families and in 1975 the membership had increased to 75 families. In 1976 the parish was under the directorship of Rev. B. Obarianyk, pastor, Walter Boyko, Theodore Dolinski, liko Szewtz, Russel Blischak, Paul Koszman, Peter Kalinewicz and Peter Shuta.

The Ukrainian Catholic parish of the Holy Trinity at Weyburn is under the pastoral charge of Estevan.

Beaver Dale - Assumption of the BVM

Beckenham -Transfiguration of Our Lord

Bobulynci - Transfiguration of Our Lord

Buchanan - Descent of the Holy Ghost

Candiac - Descent of the Holy Ghost

Carpenter - Ascension of Our Lord

Chekhiv - Descent of the Holy Ghost

Cudworth - Our Lady of Sorrows Shrine

Dnipro (Dnieper) - Transfiguration of Our Lord

Glentworth - Assumption of the

Hubbard - Exaltation of the Holy Cross

Orolow - Descent of the Holy Spirit

Saskatoon - Dormition of the Most Holy Mother of God

Wadena - Descent of the Holy Spirt

Whitkow - Ascension of Our Lord