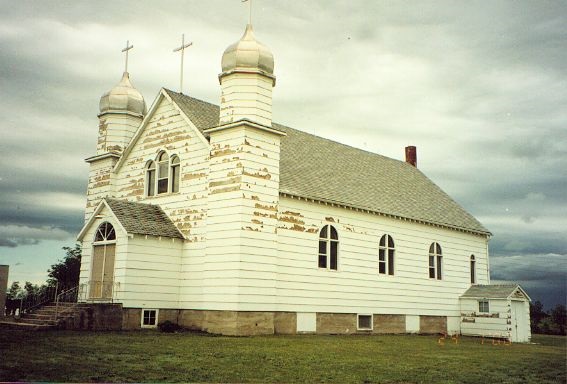 Ukrainian settlers in the Wolverine district constructed the first chapel church, 24 x 12 feet, in 1913; the one acre church site was purchased in 1912 with assistance from Rev. Achille Delaere, CSSR. The church was blessed by Rev. Ambrose Redkewich and served the faithful until 1925. When it was dismantled, its salvaged material was utilized in the construction of the second church on a three acre site six miles north of Wolverine; this new site was four miles east of the original site. Bishop Nicetas Budka blessed the church in 1926. In 1952 the church was sold and a year later was moved onto the property of the newly formed Lanigan parish. The succeeding Wolverine parish church was constructed in 1953 near the second church site. Bishop Andrew Roborecki visited the parish on several occasions and blessed the church on August 6, 1961.

The church is a wood constructed rectangular structure, 60 x 30 feet, on a high concrete basement with two frontal towers apexed by cupolas. Its walls have imitation stone asphalt siding and contain wide windows with arched summits while its gable roof is shingled and contains a cross at the frontal summit. The church is east-west oriented; the west main entrance and adjoining porch-vestibule are reached by a series of steps while the east elevated sanctuary has north and south adjoining sacristies. A small porch adjoining the south sacristy serves as an additional outside entrance into the sacristy and church basement. 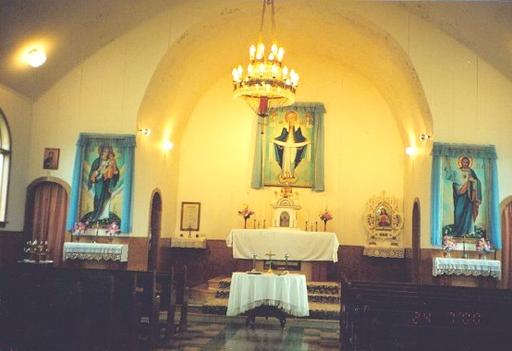 In the interior, the sanctuary church patron representation and the two traditional holy images on corresponding sides of the sanctuary are glass mounted oil prints. The church contains a choir loft reached by a stairway at the south wall of the nave in which wooden pews seat approx. 80 persons. It has electrical lighting and central oil heating. The wooden linoleum-covered floor is carpeted before the main altar and at the center aisle. All lower wall areas have imitation wood panelling; upper wall areas, including the vaulted ceiling, are finished with painted donnacona.

Ukrainian settlement in this area began in 1905 predominantly from the Borshchiv and Yavoriv counties and was initiated by the construction of a railway to Humboldt. The founding members of the parish were:

The Ukrainian Catholic parish of the Patronage of the Blessed Virgin Mary, Wolverine, is under the pastoral charge of Humboldt.

Beaver Dale - Assumption of the BVM

Beckenham -Transfiguration of Our Lord

Bobulynci - Transfiguration of Our Lord

Buchanan - Descent of the Holy Ghost

Candiac - Descent of the Holy Ghost

Carpenter - Ascension of Our Lord

Chekhiv - Descent of the Holy Ghost

Cudworth - Our Lady of Sorrows Shrine

Dnipro (Dnieper) - Transfiguration of Our Lord

Glentworth - Assumption of the

Orolow - Descent of the Holy Spirit

Saskatoon - Dormition of the Blessed Mother of God

Wadena - Descent of the Holy Spirt

Whitkow - Ascension of Our Lord

Yellow Creek - Assumption of the Blessed Virgin Mary (No church; cemetery only)